One of the advantages visiting the United Kingdom is living the history. If you love English history as much as we do and are wondering what to see at Portsmouth Harbour, a visit to Portsmouth Historic Dockyard should be first on your list! Portsmouth is an island city with a rich Naval history that dates back to 1194. To this day Portsmouth continues to be a working Naval Base and is home to around two thirds of the Royal Navy’s ships.

We came to Portsmouth with one purpose in mind, to visit the Mary Rose Museum, little did we know that it was just a small (but spectacular) part of what Portsmouth Historic Dockyard UK offers.

The Mary Rose was a war ship of King Henry the VIII of England. With a career that spanned 34 years, the story of the Mary Rose would have been lost in the mists of time had it not sunk during the Battle of the Solent on the 19th of July 1545.

The Mary Rose sunk with a massive loss of life, of the almost 500 men on board only 35 managed to survive.

From this tragedy we have been left with a unique time capsule that’s not only a glimpse into life aboard a Tudor war ship but a reminder of the heartbreak and loss that took place on that day so long ago.

The first sight of the Mary Rose gave me goose bumps, an unforgettable image that will stay with me forever.Click To Tweet

How did the Mary Rose Sink?

Nobody knows for sure how the Mary Rose sank, there are many theories but none of them have been proven. Some of the theories include…

The ship was overloaded with guns and extra soldiers, the gunport lids were left open, a recent refit left the ship unstable or that it was sunk by French gunfire.

Whatever the cause, the Mary Rose sank on its side, half submerged and covered in silt it remained preserved for the next 437 years until it was raised in 1982.

The Battle of the Solent

The Battle was fought on the Solent between Portsmouth and the Isle of Wight.

Francis the 1st of France had come to invade England to depose King Henry the VIII, liberate the English from Protestant tyranny and to restore the Catholic faith.

The French navy came heavily armed with around 175 war ships and 30 thousand troops, King Henry VIII was vastly outnumbered with only 80 warships.

Thankfully the Solent is treacherous, the English had removed the channel makers and the French eventually admitted defeat and returned home.

First Impressions of the Mary Rose

The first sight of the Mary Rose gave me goose bumps, the sheer size and the thought of the tremendous effort it took to raise her left me quite emotional, an unforgettable image that will stay with me forever.

A visit to the Mary Rose at Portsmouth Historic Dockyard, brings to life the story of the men who sailed her.

Because only half of the Mary Rose survived, (the exposed sections were eaten by marine crustaceans and molluscs), many of the recovered artefacts are displayed directly across from the massive hulk, giving the illusion of an intact ship.

As you walk around the Mary Rose exhibition, you will learn more about her crew, a community of gunners, archers, carpenters, cooks and officers.

As well as cannons and weaponry, ships tackle and equipment, a large assortment of the crews’ personal items are on display. The most confronting is a full skeleton which has been facially reconstructed and dressed as he was in life, reminding us of the human element of this tragedy.

You will also discover the lengths taken to raise the Mary Rose and the 35-year conservation process which has finally left the Mary Rose dry within its temperature-controlled glass casing.

You can easily spend hours visiting the Mary Rose Museum, it is a definite must-see attraction if you are visiting the Portsmouth United Kingdom.

The most famous ships in Portsmouth would have to be HMS Victory and the Mary Rose. We fast forward 120 years from the sinking of the Mary Rose to the launching of HMS Victory.

A visit to HMS Victory will allow you to relive the Royal Navy’s glory days, a time when Britannia ruled the waves.

HMS Victory was the flag ship of Lord Nelson and although the ship had fought in many battles its last and most famous battle was the Battle of Trafalgar.

The Battle of Trafalgar was bittersweet, it was a resounding victory for the English with the sinking of 22 enemy ships and an occasion of sadness as England lost their National Hero, Lord Nelson.

Inside the HMS Victory

Venturing inside HMS Victory, you get a taste of life as a sailor during the Battle of Trafalgar.

The Captain’s Cabin is luxurious and was home to Captain Hardy, the Captain of the Victory during the Battle of Trafalgar. The cabin is light, airy and beautifully decorated, a stark contrast to life below decks.

Directly off the Captain’s Cabin is the Quarter Deck. It’s not hard to imagine Captain Hardy and Lord Nelson standing at the helm, battle raging all around. It was here that Lord Nelson was shot, mortally wounded by a French snipper.

Crouching to make your way below decks, large cannons stand ready to be fired while rows of hammocks hang in cramped quarters, within these walls around 460 sailors slept, ate and fought.

Punishments could be harsh, discipline was strict and offences such as drunkenness would be punishable with anything up to 36 lashes.

Visiting HMS Victory was fascinating and gave new insight into this famous battle.

Powered by GetYourGuide. Become a partner.

The HMS Victory and the Mary Rose are just part of the maritime treasures on offer at the Portsmouth Historic Dockyard.

Onsite you will find the National Museum of the Royal Navy, 36 hours: Jutland 1916, the HMS Victory Museum Portsmouth UK and much, much more.

Other old ships in Portsmouth Harbour complex include the HMS M33 the only surviving ship from the Gallipoli Campaign and HMS Warrior the world’s first iron-hulled warship.

The Emirates Spinnaker Tower stands like a giant billowing sail, dominating the skyline of Portsmouth Harbour.

A short walk from the Portsmouth Historic Dockyard, the Emirates Spinnaker Tower is perfect for those who want a bird’s eye view of Portsmouth Harbour.

Views stretch out across the harbour to the Isle of Wight and beyond. From the top you can watch ships, sailboats and Wightlink Ferries make their way across the Solent.

Below, HMS Warrior stands proud showcasing the Portsmouth Historic Dockland, in the distance the stunning aqua waters of the Solent glisten in the sun.

You can walk across the glass floor and look down to the dizzying depths below, dine at the Waterfront Café or relax with a cream tea while enjoying stunning views at The Clouds café.

For those with an adventurous spirit an abseil down the side of the tower is the ultimate thrill and one I would like to experience.

With a massive selection of shops, restaurants, bars and a picturesque marina, Gunwharf Quays is a shopaholic dream and the place to be seen.

You can spend hours shopping at this designer brand outlet where you are guaranteed a 60% discount. Restaurants and bars overlook views of the marina and Portsmouth Harbour.

The Ship Anson Pub is a quaint pub within walking distance to the Portsmouth Historic Dockyard and Gunwharf Quays.

The Ship Anson is a cosy pub, the perfect place for a cool beer after a hard day of sightseeing and shopping.

The pub serves hearty selection of traditional pub favourites including fish and chips, pie and mash and Sunday roasts.

There are a range of hotels near Portsmouth Historic Dockyard that are perfect for weekly or weekend breaks on the South Coast.

We have chosen two, one for couples and one for family style accommodation, both are within walking distance to Gunwharf Quays and Portsmouth Historic Dockyards.

The Ship Leopard Hotel is right next to Portsmouth Historic Dockyard, the Emirates Spinnaker Tower and Gunwharf Quays entertainment and shopping area are a short walk away.

The Ship Leopard is a boutique hotel with comfortable rooms styled in an elegant modern décor. There are a range of room choices with some rooms having a view of HMS Warrior.

The Ship Leopard Hotel is close to Portsmouth Harbour train station with links to London and Brighton. It’s also close to the Wightlink Ferry terminal for connections to the Isle of Wight.

With a selection of apartment styles that include studio, one bedroom and two-bedroom apartments, the Gunwharf Quay Apartments cater to businessmen, couples and families alike.

Apartments are light, airy, modern and spacious. Features include a dining and sitting area as well as kitchen facilities.

The Gunwharf Quay Apartments are close to the Portsmouth Harbour train station and the Wightlink Ferry terminal for connections to the Isle of Wight.

We thoroughly enjoyed our time in Portsmouth, we discovered an illustrious history and walked in shoes of sailor’s past and present.

There is so much more to see and do in Portsmouth, visit the D-Day Story Museum or maybe catch a ferry over to the Isle of Wight. Portsmouth’s beautiful harbour and attractions will keep you coming back for more. 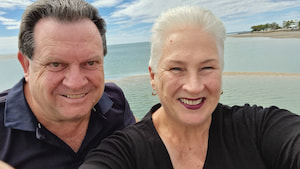