Broome invokes images of brave divers looking for adventure and the promise of riches as they put their life on the line for the lustrous beauty of the pearl. Today Broome’s mystique continues to charm as it is adorned with stunning beaches, has a history filled with courage and is a steppingstone to the splendour of the Kimberley’s. So come along with us as we show you the best day trips from Broome West Australia.

There is an interesting selection of things to do in Broome including Broome day trips and tours. Whether you choose to visit independently or take a tour you will find a range of activities that showcase the pearling industry and natural beauty of the Broome region.

Here is our list of fun and informative Broome tours that give a good overview of the town and the memorable Broome experiences further afield.

To help you choose which Day Trips From Broome tour is right for you, we have compiled a snapshot of the the popular day trips from Broome along with a brief description of what’s included. Below in the article is a detailed overview of each tour.

When we visited Broome we stayed at this awesome resort right near Cable beach.

The Horizontal Falls Half-Day Tour from Broome is possibly the best loved tour for those wanting to take Kimberly tours from Broome.

The adventure starts with a seaplane flight from Broome to Horizontal Falls. Once there, board the fastest boat in the Kimberley for a thrilling boat ride through the falls. Relax and admire the beauty of the untouched bays and creeks.

For the ultimate experience swim and feed friendly fish from the crocodile and shark free cage and enjoy a cooked breakfast or Barramundi BBQ lunch on board a luxury vessel.

On the return flight from Talbot Bay have your camera ready as you fly low across the Buccaneer Archipelago, Cape Leveque, Lombadina, Beagle Bay, Willie Creek Pearl Farm, Cable Beach and Broome township.

These popular day trips from Broome get snapped up quickly so make sure to book early to avoid disappointment.

One of the most Instagram worthy tours of Broome would have to be the Broome Sunset Camel Tour. Amble leisurely along Broome’s iconic Cable Beach and enjoy a spectacular West Australian sunset atop one of these majestic camels. Pure magic!

This would have to be one of the most informative tours of Broome and is perfect for anyone visiting on a tight time frame or just wanting to get a good overview of Broome.

The tour takes you to many of Broome’s top attractions including Cable Beach, the dinosaur footprints at Gantheaume Point, the Staircase to the Moon lookout, Broome Jetty, Chinatown, the Japanese Cemetery and so much more.

Don’t miss out on this fantastic tour, book early as places sell out quickly.

This tour takes you to 3 of Broome’s most popular attractions Matso’s Brewery, Broome Museum and Malcolm Douglas Crocodile Park.

Matso’s Brewery is one of Broome’s favourite venues and is famous for its alcoholic Ginger Beer. Matso’s has an interesting assortment of refreshing fruit beers, on this tour you can sample Matso’s signature ginger beer and mango beer.

The Broome Museum is a fabulous place to learn about the pearling industry and the day WWII came to Broome’s shores. The Malcolm Douglas Crocodile Park will leave you enthralled as you watch crocodiles being fed and marvel at the speed of these fascinating creatures.

One of the best day trips from Broome would have to be a sunset whale watching cruise.

During the cruise you will learn about the lifecycle of the whales and why they are crucial to the survival of the planet. Relax and enjoy meeting a variety of wildlife and watch the sunset with a glass of bubbles.

Things to do in Broome

If you are looking to do Broome day trips independently there is a lot to pack in so make sure you have lots of time to spare.

Chinatown is the historical heart of Broome and home to a collection of heritage listed buildings. The area is a vibrant retail hub with a variety of shops which include Paspaley Pearls and the Broome Gallery which displays the colourful artworks of Kimberley artist James Down.

Sun Pictures retains the spirit of Chinatown of old and began its life as a Japanese playhouse for traditional Noh theatre. In 1916 Sun Pictures opened its doors to a brand new era as the picture theatre screened the latest silent movies.

Inside the theatre you will find an interesting array of projection equipment and movie posters which relive the glory days of Hollywood. If you have time, make sure to catch a movie under the stars in this unique outdoor cinema.

Located in the Old Customs House, the Broome Historical Museum pays tribute to the pearling industry with many displays explaining the intricacies and dangers of pearling.

There is also a large exhibit on the Japanese air raids of World War II. Broome was attacked four times during WWII, the worst being on 3rd of March 1942 when at least 86 people lost their lives.

This small museum tells many stories and is a must to see when visiting Broome.

Cable Beach got its name from the Broome to Java telegraph cable which was laid in 1889. With 22 km of glistening white sand and the bright turquoise waters of the Indian Ocean, Cable Beach has a reputation for being one of Australia’s prettiest beaches.

One of the must do activities on Cable Beach is to take a sunset camel ride along the beach. For those wanting a more even suntan there is a nudist beach which can be found North of the Rocks.

The Dinosaur Coast will take you on a journey back 130 million years to a time when dinosaurs ruled the earth. Dinosaur footprints can be found in several locations around Broome, here are just two sites that will have you enthralled.

Entrance point is another viewing site for Theropod, Sauropod and Ornithopod tracks. To get to the Entrance Point dinosaur footprints head to the car park north of the second boat ramp to Reddell Point.

The best time to see the dinosaur tracks is at low tide with most tracks only visible with a tide of less than 2.4 metres.

Staircase to the Moon

If you want to see a little bit of magic, make sure to visit Broome at full moon between March and October.

If you are looking for unique day trips from Broome look no further than the Malcolm Douglas Crocodile Park.

When driving through West Australia and the Northern Territory you are often confronted with signs telling you to be Croc Wise and after visiting Malcolm Douglas Crocodile Park you will understand why.

The seemingly tranquil waters of the park suddenly come alive with crocodiles at feed time, and it is incredible to see how fast crocs can be. Our guide was hilarious, and we learnt so many astonishing facts about crocodiles and alligators during our visit.

There is a display on the life and times of crocodile hunter and TV personality Malcolm Douglas, and a highlight of the trip was the chance to hold a baby crocodile.

The Malcolm Douglas Crocodile Park must be one of the most interesting day trips from Broome!

Whether staying for lunch or relaxing on the deck Matso’s Broome Brewery is the place to come to sample their famous alcoholic Ginger Beer.

We had the pleasure of spending an afternoon sampling 5 different fruit beers when we tried Matso’s Tasting Paddle. We chose the Ginger Beer, Mango Beer, Matso’s Hard Lemon, Angry Ranga which was ginger chilli flavoured and Pearler’s Pale Ale.

Favourites were the ginger beer, mango beer and hard lemon. Matso’s has a terrific atmosphere and we instantly regretted ordering chips when we saw the delicious range of dishes the other guests were eating.

Between June to September the Broome Thursday Night Markets delight the senses with a unique selection of international cuisines, clothing, jewellery and craft.

The market is on Hamersley Street at the Town Beach Precinct and is a fabulous place to unwind with live music and watch the Staircase to the Moon on full moon nights.

The Thursday Night Markets are open between 4pm and 8pm.

The Broome Courthouse Markets are held in the Heritage listed gardens of the Broome Courthouse which is located on the corner of Frederick and Hamersley Street. The markets have a great range of food, pottery and paintings, children’s clothes, live music and so much more.

Where to stay in Broome

Broome has a great variety of accommodation that will suit every budget including luxury hotels, holiday apartments, caravan parks and camping grounds. During our trip to Broome, we had the pleasure of staying at the Blue Seas Resort near Cable Beach.

The Blue Seas Resort is apartment style accommodation which is located 600 metres from Cable Beach. The resort is a short walk to restaurants and within driving distance to Broome attractions.

Our apartment was comfortable and spacious with a fully equipped kitchen and laundry facilities. The grounds were well presented with the pool and barbeque areas being well shaded with tropical gardens. 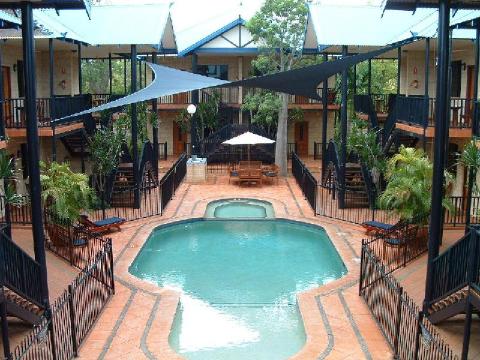 How far is Broome from Perth?

The quickest drive from Perth to Broome takes approximately 23 hours via inland Highway 95 and the distance is around 2050 km. The coastal road via Highway 1 will take approximately 24 hours and is a distance of around 2400 km

When is Broome whale watching season?

The best time to visit Broome to see whales is from July to end of August when sightings are guaranteed via a local tour.

What is the Staircase to the Moon Broome?

The Staircase to the Moon is a natural phenomenon that occurs 2 to 3 times a month when the full moon rises over the tidal flats of Roebuck Bay Broome. It creates the illusion of a stairway leading to the moon and is a must see attraction when visiting Broome during a full moon.

We hope you enjoyed our list of best day trips from Broome, we visited Broome as part of our Darwin to Perth road trip and have only scratched the surface on what to see in Broome, you will find many more Broome day trips and tours to choose from.

Broome is one of Australia’s last frontiers, a place with a rich history and the gateway to the rusty wild landscapes of the Kimberley’s. With a world famous beach, a modern lifestyle, great restaurant and coffee culture Broome needs to be on everyone’s list of places to visit in Australia. We are Alan and Ros. An Australian couple that love exploring the world. We share with you here all the best places to visit in Australia and beyond and everything else you need to get the best out of travel! Read more about us here.